These resources about domestic abuse and where to find help were collated by A.D.V.I.C.E., a cross-industry group set up in 2019 to share accurate health and wellbeing information with transport and construction workers.

Domestic abuse, or domestic violence, is defined across Government as any incident of controlling, coercive or threatening behaviour, violence or abuse between those aged 16 or over who are or have been intimate partners or family members, regardless of their gender or sexuality.

What is domestic abuse?

‘Domestic abuse’ covers a range of types of abuse, including, but not limited to: psychological, physical, sexual, financial or emotional abuse.

‘Domestic abuse’ can be prosecuted under a range of offences and the term is used to describe a range of controlling and coercive behaviours, used by one person to maintain control over another.  It is usually perpetrated by the person’s partner but can also be committed by a family member or carer. It can happen at any time during a relationship, even after a couple has split.

Domestic abuse is rarely a one-off incident and it is the cumulative and interlinked types of abuse that have a particularly damaging effect on the victim.  The ‘domestic’ nature of the offending behaviour is an aggravating factor because of the abuse of trust involved.

Anyone forced to change their behaviour because they are frightened of their partner or ex-partner’s reaction is experiencing abuse.

Men, women and children can all be victims of domestic abuse.  Domestic abuse occurs amongst people of all ethnicities, sexualities, ages, disabilities, immigration status, religions or beliefs and socio-economic backgrounds.

The Crown Prosecution Service (CPS) recognises domestic abuse differs in severity between incidents and, more often than not, will increase in frequency and seriousness, having a cumulative impact on the victim/complainant.

The definition includes so-called 'honour' based violence, female genital mutilation (FGM) and forced marriage, and is clear that victims are not confined to one gender or ethnic group.

What is controlling or coercive behaviour?

‘Controlling or coercive behaviour’ describes behaviour within a current or former intimate or family relationship which causes someone to fear that violence will be used against them on more than one occasion, or causes them serious alarm or distress that substantially affects their day-to-day activities.

It involves a pattern of behaviour or incidents that enable a person to exert power or control over another, such as isolating a partner from their friends and family, taking control of their finances, everyday activities like what they wear or who they see, or tracking their movements through the internet or mobile phone use.

Controlling behaviour is: a range of acts designed to make a person subordinate and/or dependant by isolating them from sources of support, exploiting their resources and capacities for personal gain, depriving them of the means needed for independence, resistance and escape and regulating their everyday behaviour.

Coercive behaviour is: an act or a pattern of acts of assaults, threats, humiliation and intimidation or other abuse that is used to harm, punish, or frighten their victim.

So-called ‘honour-based’ violence is a crime or incident committed to protect or defend the so-called ‘honour’ of the family or community.  The term can cover a collection of practices used to control behaviour within families or other social groups in order to protect perceived cultural and religious beliefs or honour.

These crimes are included within the domestic abuse definition, but may also be carried out by people who are not partners or family members.

A number of offences can be committed in the context of ‘honour-based’ violence and forced marriage, including common assault, grievous bodily harm (GBH), harassment, kidnap, rape, threats to kill and murder.

Examples of instances that might trigger a so-called ‘honour’ crime include someone becoming involved with a boyfriend or girlfriend from a different culture or religion, wearing clothes or taking part in activities that might not be considered traditional within a particular culture, or seeking a divorce.

Female Genital Mutilation (FGM) is a collective term for a range of procedures which involve partial or total removal of the external female genitalia for non-medical reasons.  It is sometimes referred to as female circumcision, or female genital cutting.

The practice is medically unnecessary, is extremely painful and has serious health consequences, both at the time when the mutilation is carried out and in later life.

Stalking and harassment does not only occur in a domestic abuse setting – people can be stalked by strangers or acquaintances too.

Stalking is a specific type of harassment, often described as a pattern of unwanted, fixated or obsessive behaviour which is intrusive, and causes fear of violence or serious alarm and distress.  For example, a person following, watching or spying on someone else, or forcing contact with them through social media, might be considered as stalking.

Harassment offences involve a ‘course of conduct,’ or repeated actions, which could be expected to cause distress or fear in any reasonable person.  This will often include repeated attempts to impose unwanted contact or communication on someone.

If you believe that you or someone else could be a victim of domestic abuse, there are signs that you can look out for including:

For anyone who feels they are at risk of abuse, it is important to remember that there is help and support available to you, including police response, online support, helplines, refuges and other services. You, or they, are not alone.

If you’re worried a friend is being abused, let them know you’ve noticed something is wrong.  They might not be ready to talk, but try to find quiet times when they can talk if they choose to.

The Canadian Women’s Foundation created a hand signal to help domestic abuse victims all over the world alert people that they require assistance.  It is called the ‘signal for help’.  The hand signal involves lifting a hand – for example to the camera in a video call – putting down the thumb over the palm of that hand and then closing the rest of the fingers over the thumb. 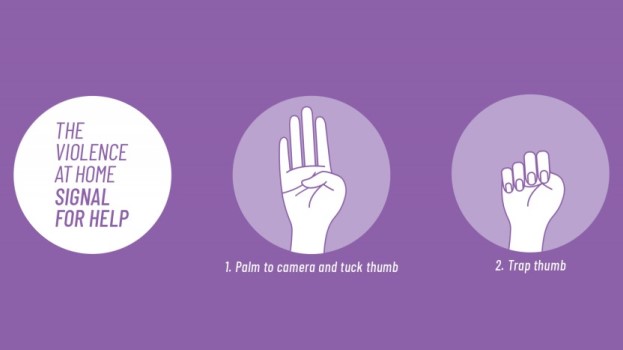 Gov.uk Domestic abuse: where to get help

More advice on how to get help and how to spot the signs can be found on the NHS website.

There is a new scheme launched in conjunction with train operators, called Rail to Refuge, which offers free travel to people escaping domestic abuse. Women's Aid: what is domestic abuse?