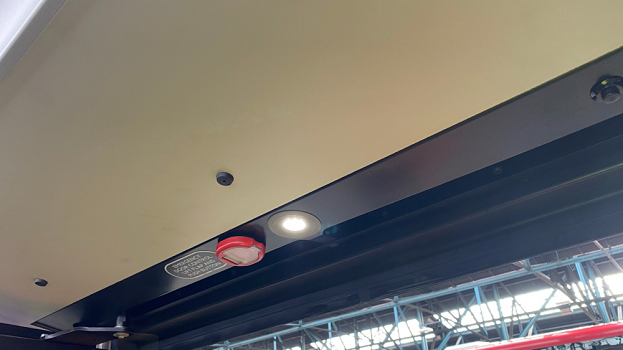 A faulty light on board bus HA26 at Arriva London’s Brixton garage was a source of distraction to drivers and could contribute to road risk, according to a concern raised through CIRAS. The person reporting the issue believed that Arriva London South was aware of it. They described the lights above the front passenger doors of the bus flickering on and off intermittently throughout the journey. They were also concerned that this flickering may have the potential to trigger a seizure in passengers with epilepsy.

The reporter believed that this issue was due to a faulty sensor unable to determine when the doors are opened (lights on) or closed (lights off). They also noted that this issue can be difficult to identify as the flickering is inconsistent, giving the false appearance that the sensor has been repaired. They asked Arriva London South to identify the source of the issue and fix it.

The vehicle was removed from service the day after we received this report and inspected. A video of the inspection confirmed that no defect was identified.
Vehicle Condition Reports (defect logs) for HA26 from 27 March 2021 to 27 April 2021 were reviewed to try to ascertain when the vehicle developed the reported alleged defect. A defect had been recorded and checked at that time by an engineer, and no defect found, 19 April 2021.

We obtained a more detailed explanation of the defect through interviews. With this additional information, the vehicle was reinspected. The cover above the entrance door was removed to check for loose connections potentially causing the intermittent defect.

During this inspection, the microswitch that operates when the doors are opened or closed – to turn the lights on or off – was found to be insecure. This was made secure and the vehicle taken on an extensive road test.

No further occurrences of the defect have been reported, so we now consider this repaired. As a result of the identified defect, over the next 35 days, all vehicles of this type will have the security of the microswitches checked and repaired if needed.