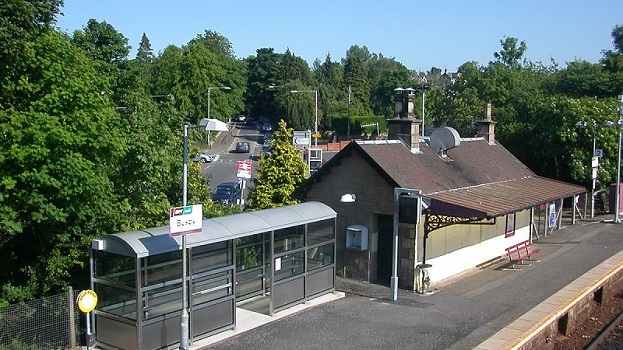 A reporter has raised a concern over the safety of dispatching services from the Glasgow bound platform at Busby station, on the East Kilbride line. This platform is curved, and therefore the platform starting signal is out of view for conductors.

The reporter is aware that conductors are advised to rely on drivers to check the signal, rather than walk down the platform, as this can cause delays. However, the reporter is concerned that this process is leading to dispatch ambiguity as usually conductors hold sole responsibility. On platforms with similar issues, OFF indicators are often implemented to mitigate the risk of a signal passed at danger (SPAD).

Abellio Scotrail are asked if they could:

We would like to thank the reporter for raising their concerns. There is a local dispatch instruction for this platform which is as follows: After arriving, the conductor will undertake platform train interface (PTI) and train dispatch duties from the optimal intermediate position of the platform/train as stated in the train dispatch risk assessment.

After closing the train doors and ensuring the platform is clear, they will give the driver two rings on the bell buzzer indicating that station work is complete and the train is ready so start. It is then the driver’s responsibility to check that the remote starting signal is displaying the correct aspect before departing the station. ID plates are fitted so that the driver can phone the signaller if the previous signal is displaying a cautionary aspect.

Conductors do not have sole responsibility at any location for dispatching trains as it is also the driver’s responsibility to dispatch trains safely as per the Rule Book. However, we are currently in discussions with Network Rail regarding the feasibility of fitting an OFF indicator on the platform, as suggested by the reporter, as we see this having both safety and performance benefits.