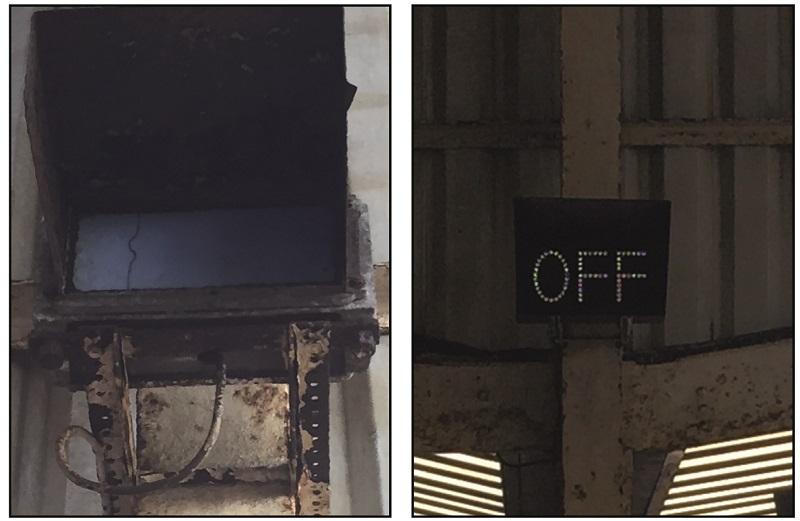 © Network Rail. Before (left) image of the old indicator and after (right) image of a LED type indicator.

Concern
A reporter raised a concern about the poor visibility of the OFF indicator for train dispatch on platform 3 at Preston station. Both the lighting and the positioning of the indicator were issues here. The indicator was said to be old, small, dim and positioned high up on a gantry. This made it difficult to see from the back of the train and impossible to see when sunny.

This issue had been previously reported to Network Rail and nothing had been done. The reporter was concerned that a train could be dispatched against a red signal, causing a potential incident, and asked Network Rail and Virgin Trains to work together to:

Virgin Train's response
We would like to thank the reporter for highlighting this issue. The Local Virgin Trains Safety Manager and the Local Network Rail Operations Manager have inspected the current indicator and have decided on the following:

Network Rail's response
Network Rail would like to thank the reporter for raising their concerns on this issue. The indicator referred to is a Category 5 readability, with a required maximum reading distance of 65 metres. Due to the positioning of train dispatch equipment (i.e. Train Ready to Start button), it is likely that the train dispatch staff are attempting to read the indicator from more than 65 metres.

Actions taken as a result of this report:
The indicator was replaced to an LED type (with extended hood) in March 2018. This type will provide a brighter indication and is the most practical resolution of the issue. Platform staff will be informed of the specified 65 metres or less distance that the indicator is designed to be seen from. Dispatch working practices will be reviewed with respect to position from which the indicator is viewed.

In the long-term, it might make sense to reposition the OFF indicator to a better position. However, there are limited options for re-positioning the indicator. The cost would be high, but this will be considered with any future signalling renewal projects. Providing an additional indicator would require design work and is not reasonably practicable, unless it becomes part of another signalling renewal scheme in the area.