Damaged drainage grates and concrete set to be replaced. 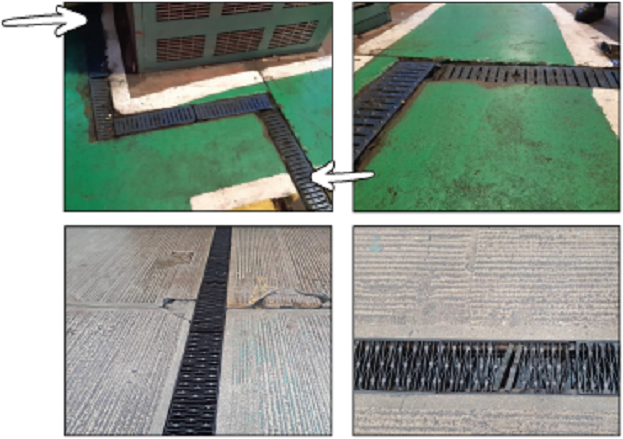 According to a recent concern, the drainage system in the outside area of Stagecoach’s Ashford depot, Kent, is damaged, and has got worse over several years. The reporter was concerned that staff could get stuck in gaps in the drainage grates and break an ankle. They said staff had already been injured because of the damage, and that staff inductions warn about this hazard. The second part of the concern was about holes in the concrete around the grates. The storm drain subsided with any pressure on it – because of the damaged concrete – resulting in a further slip/trip/fall hazard. The reporter was concerned the issue would become more dangerous for staff because of the continuous traffic of heavy vehicles over the area. They asked Stagecoach Bus to fix the drainage grates and concrete.

We attended site a few days after the CIRAS report to inspect the issues.

In the workshop area, the walkway crosses over small internal drains designed to stop water running off the yard into the office. Over time these have failed, leading to an uneven area across the walkway. If unattended, it is likely that the level change on the surface will increase, as will the chances of a trip hazard. The flooding has subsided, so we propose to remove the drain across the walkway (as shown by the arrows). In its place will be a drainpipe below ground, with concrete finishing so the walkway is level. The drains outside the walkway are not a hazard and will allow draining if needed. Our engineering manager will liaise with local contractors, and we expect the work to be completed in eight weeks from the report. Contractors are working on extended lead times due to the pandemic.

There are drains across the exterior yard and parking area, with covers that allow water through. Over time, these covers have corroded and failed at the weakest point due to high traffic. At present, this should not cause an issue if wearing sensible shoes. But the failure could increase and cause an issue over time. Areas of concrete on the walkway have also failed. The failed drain covers and concrete both need to be replaced, and the walkway repainted. There should then be a programme set up to change the remaining covers before they fail. Our engineering director will locate a manufacturer for the covers, or arrange for them to be made and fitted to site. They will also arrange repairs for the concrete, and for the walkways to be re-marked. We expect the work to finish 12 weeks from the report.