We asked Nick Millington, director of Network Rail’s Safety Task Force, about its launch and removing unassisted lookout and LOWS working on the railway.

Safety Task Force launched in September 2019. Tell us a bit about it.

The task force is a partnership with all key players in the industry, pulling together multiple programmes to improve trackworker safety. One of the key areas for improving safety is working towards the removal of lookout working.

Why did the safety task force start?

The trigger for formalising the Safety Task Force was an incident at Margam in Wales on 3 July 2019, when the driver of a Great Western Railway train reported that the train had struck three people working on the South Wales Main Line track. Our colleagues Gareth Delbridge and Michael ‘Spike’ Lewis were fatally injured. Another colleague escaped by inches.

Improvement notices from the Office of Rail and Road (ORR) followed, but discussions around removing lookout working were happening before this, as part of the Near Miss Reduction programme. It is a shame it took the improvement notices to give more focus to the programme.

The key legacy will be to remove the need for working where the only form of protection is a human lookout warning, as well as a cultural shift across the industry, improving safety culture.

Unassisted lookout working and LOWS – lookout operated warning system – will be removed. They involve trackworkers working on an open railway line. There is no need for staff to work in this way, which is fundamentally high-risk – staff should always be able to work in as safe a manner as possible.

Why focus on unassisted lookout and LOWS?

These are high risk ways of working. Figures show that 80% of incidents where trackworkers were struck by a train between 1997 and late 2020 were the result of lookout system failure. From April 2019 to June 2021, 13% of work was planned with lookout/LOWS working, but lookout/LOWS working was involved 60% of all the near-misses in this time.

Through better planning, better data and better co-ordination across the business (such as between signaller, planner and trackworker), we can remove the need for open line working.

Have there been challenges?

The safety task force was aware that with any changes in working practices there is the potential for risk to change. Collecting, analysing and monitoring data is key to mitigate against this – as is giving people ways to report a concern they have.

Some resistance to the changes has been based on anecdotal stories around the potential impact. But through looking at existing data and improving the way we track and monitor data, we have been able to assess these and demonstrate what is really happening.

All areas of the business have been involved, and there are regular meetings across Network Rail’s routes to update them with progress.

Are there any concerns?

There are concerns about potential delays as there will need to be a line block as a minimum for colleagues to go onto the line. Putting in place a more joined-up and structured approach will help manage this.

For example, for a fault or track circuit failure, you can arrange a 10-minute diagnostic line block and ensure staff are ready on site, with relevant tools and equipment to do the initial inspection. They can decide how best to manage the fault. Can it be fixed later during a possession? Can services be managed safely until work can be done safely? 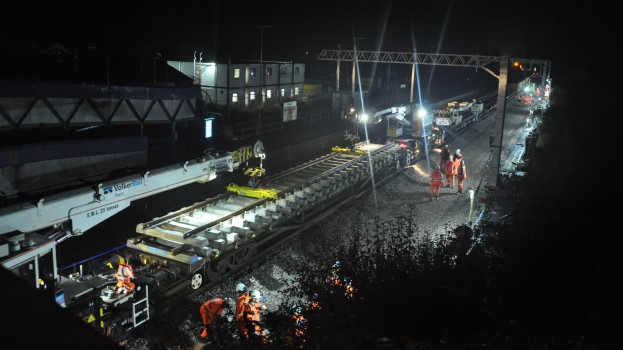 Above: A railway possession © Network Rail

How is it going so far?

Those who have achieved zero will not want to go back to previous ways of working.

Will it affect jobs if the lookout competence is removed?

No. Lookout was a joint competence with site warden – this has now been split. The lookout competencies have been dramatically reduced and not renewed. Site wardens are still essential. The shift is to managing people in a protected work area – it has changed from warning to protection.

Will there be more night shift working?

There has been a slight increase in night work (from 36% to 45%), but over half of work (55%) is still during day shifts. Having a better understanding of the best times to carry out work and when it is suitable to get possessions or line blockages will allow more informed planning of work and less time sitting around waiting to start work.

There is no need to work in front of a moving train – don’t accept it. Everyone thinks they’re safe, until they’re not – the difference is a split second.

Remember: you can raise any concerns you have about changes affecting risk in your workplace through CIRAS and we’ll share them with the company in confidence.