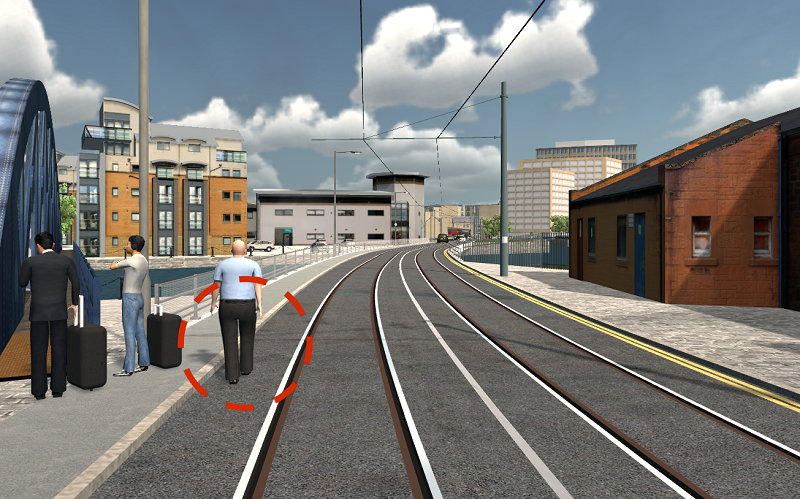 Becoming familiar with the hazards on a particular route has long been part of a driver’s training – be that bus, tram, or rail. But what about unanticipated hazards – things that just happen en-route, requiring a swift and safe response? In the light-rail sector, several of our members are working with the Light Rail Safety and Standards Board (LRSSB) to trial a new hazard perception tool to help drivers hone their skills. Although initially for light rail, it has potential for other sectors too.

Training to enable drivers to better spot hazards on a route effectively has traditionally focused on static hazards – things like signals, sharp bends, spots where the rail can be more slippery, or coming into platforms. But do drivers have the skills to spot developing hazards – unexpected situations that can occur at any time, such as a car pulling out in front of the tram, a cyclist swerving, or a dog on the loose? How will a driver react to these hazards?  Will they spot them early or too late? And what impact will this have on their driving – will it make them over-cautious or aggressive?

The hazard perception tool
While light rail is already one of the safest modes of transport, LRSSB has recently developed a new tool aimed at reducing near misses caused by unexpected hazards which could result in more serious incidents. The idea came from DVLA’s hazard perception test for learner drivers, which uses dramatized videos to depict potentially dangerous situations. Building on this, the LRSSB team decided to use artificial intelligence, like that used in driver simulators, to create 10 scenarios that show lifelike hazards which tram drivers might come across. They used street footage from Manchester, Edinburgh, Nottingham, Birmingham, and Croydon tram routes to build the scenarios.

The tool tells participants which hazards they spotted and how quickly they reacted. Drivers can use this information to practise, improving their reaction times and getting the balance right between responding too aggressively or over-cautiously.

Making the best use of the tool
As well as enhancing training for new drivers, the tool may be used in recruitment and selection to test candidates’ observation and reaction skills. It will also be used to help test, refresh, and maintain competence going forward.

As more operators use it, more data and feedback will be available to develop new scenarios and to gain insight into behaviours across the sector. This can be used to help build solutions to the risks posed by common hazards. Having a single tool across the industry will allow industry-wide data sets to be created.

The hazard perception tool potentially has value beyond light rail. Bus and train drivers face many of the same scenarios as tram drivers. It could also be useful for track workers by creating scenarios that may arise in a track environment. In fact, it has potential for any safety-critical task to help raise awareness of unexpected hazards.

Rolling the tool out
CIRAS member West Midlands Metro is the first light-rail operator to trial the tool, with plans to run another trial with Tramlink in Croydon. The tool is now available to all LRSSB members.

To find out more about the tool, contact Steve Duckering, operations manager at LRSSB on SteveDuckering@uktram.co.uk.