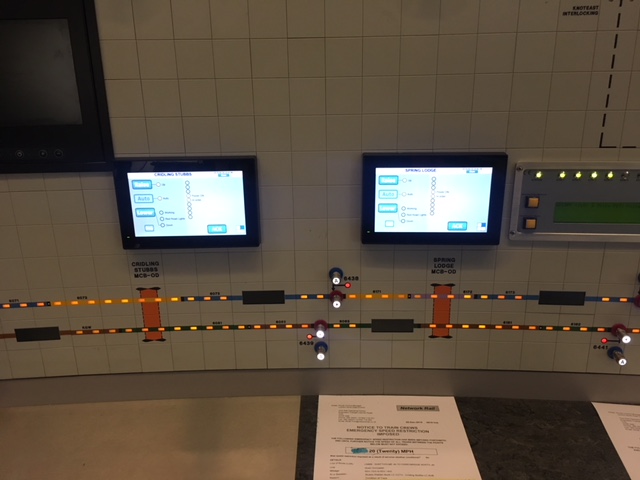 A reporter has raised a concern regarding the new obstacle detection level crossings that have been introduced at Ferrybridge signal box. According to the reporter, signallers have received no training on how to operate the crossings.

There are various action alarms that sound in the event of a level crossing failure or emergency, but signallers have not been briefed on what action to take should the alarms sound.

The concern is that signallers could fail to take the appropriate action following an alarm. For example, there is a potential risk that a train could be signalled to proceed through a level crossing, when it shouldn’t be allowed to.

Also, the screens often freeze, meaning signallers have no visible indication of the level crossing, and have not been guided on what action to take following this. It is felt that signallers are using trial and error to act upon receiving an action alarm.  This is not efficient and could potentially lead to operational incidents, should the wrong action be taken.

Therefore, the reporter asks Network Rail if they could:

Network Rail would like to thank the reporter for raising their concern. An industry learning day brief for Manually Controlled Barriers with Obstacle Detectors (MCB-OD) operations was produced in February 2017 and was designed to be used as a briefing tool for signallers.

The document was produced by the Signalling Design Group York and was issued to York Rail Operating Centre and other operating locations fitted with MCB-OD crossings. The briefing document details the indications and controls and describes obstacle detector fault, failed, local Crossing Clear Unit and failed indications. The document also describes the actions required when the obstacle detector at an MCB-OD has failed.

What is not described in any document is a definitive action to be taken in the event of the screen freezing. However, when the screen freezes the signaller is unable to operate the crossing and cannot determine if the road lights are working nor operate the lower/raise buttons. Therefore, the signaller must arrange for an attendant to be appointed. The document will now be updated to consider actions to be taken when the screens freeze, this was incorporated into local briefings by February 2019.

Details of investigation carried out:

The previous power supply was the root cause of the screen failures. Since the supply change, we have been reviewing FMS and there has been no recurrence of the problem. The existing screens will now remain in place. In addition an ergonomic review of the MCB-OD operation was undertaken on 11/01/19 to review the existing screens and for the new screen to be installed for Cridling Stubbs which was converted to MCB-OD.

The industry learning day brief for MCB-OD operations has been re-issued to signallers. We have issued an email instruction advising signallers that, in the event of the MCB-OD screen freezing and indications cannot be determined, then trains must not be authorised over the crossing until an attendant has taken duty (Rule Book Module TS9 applies). We have been provided with more material for signaller briefing/training.

The following actions have taken place: