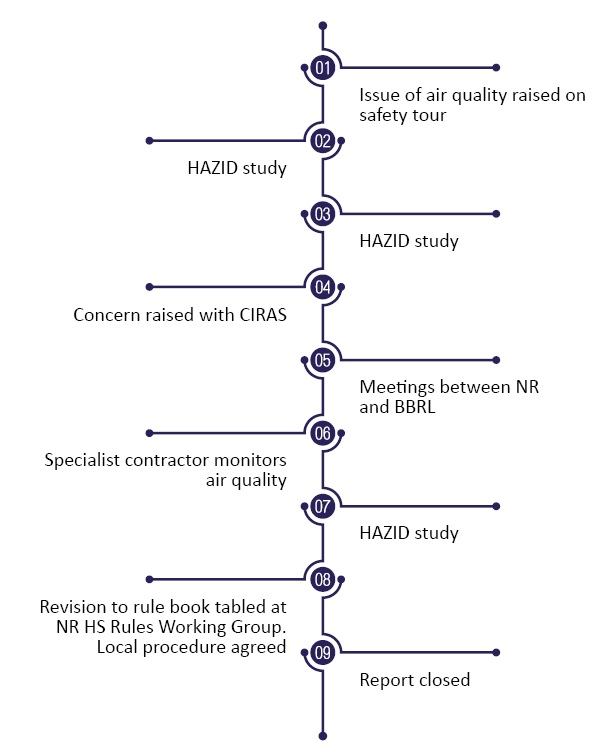 Concern
A reporter was concerned about exposure to dust and diesel fumes before and after maintenance shifts on overhead wires in London Tunnel 1, London Tunnel 2 and Thames Tunnel. According to the reporter, staff are often waiting unnecessarily in tunnels for long periods, in poor air quality.

The reporter advised this is because Network Rail staff are instructed to keep track possessions in place until near the planned times, meaning staff could be waiting in tunnels for hours before and after the work. While the reporter appreciates that they must work in these tunnels, they felt that it should be at minimal exposure, to reduce possible long-term carcinogenic effects on their health.

They asked Network Rail to:

Network Rail's response
Network Rail High Speed (NR HS) is the infrastructure manager for the three tunnels. These tunnels, with internal platforms and ventilation systems, have cross passages between each bore at regular intervals and surface access from headhouses (buildings at the top of tunnel shafts). The ventilation fans can provide air movement during maintenance operations but unfortunately, at the time of this report, the High Speed 1 (HS1) rule book did not allow this. Staff access the tunnels from the headhouses, meeting the operators and machines in the tunnel, and leave via the headhouses when the work is complete. Therefore, there is time before and after work tasks when rail plant is standing awaiting authority to move in the tunnel.

It is NR HS policy that track possessions are given up as soon as they are no longer required for the protection of work activities. The result of the investigation is that plant is not being held unnecessarily in the tunnels and that no exposure to dust or fumes exceeded the safe limits identified by the HSE. The report has prompted several reviews, however, as detailed later. These have led to changes in working practices and operating procedures to reduce exposure to dust and fumes even further.

Hazard identification
The issue of air quality was first raised on a safety tour. A Hazard Identification (HAZID) study a month later, before the report, identified that in the short term the exhausts of auxiliary power unit (APU) modules could be directed away from staff, and the power units could be turned off after work activities to reduce emissions. For the long term, this HAZID study here suggested reviewing planning arrangements to ensure the exit marker is outside of the tunnel. The study also suggested reviewing tunnel ventilation operations in the HS1 rule book, and the electrical and mechanical information system (EMMIS) control instructions, to ensure ventilation fans operate from the time the plant arrives at a marker in the tunnel to when it leaves.

While there is no evidence that plant is being held in tunnels unnecessarily, both short-term actions recommended have been carried out. Network Rail’s planning section is aware of the issue, and the need to limit the length of time plant is confined to the tunnels, and endeavours to ensure the exit marker is outside the tunnel where possible. A further HAZID before the report proposed modifications to the HS1 rule book instruction to the NR HS Rules Working Group, which challenged them and asked for further development.

A couple of months following the report, two meetings between NR HS and the operator Balfour Beatty Rail Limited (BBRL), with staff representation, identified further mitigations, such as reducing the number of traction engines running from four to one. This was implemented as a BBRL driver operations process to control engine use.

Air quality monitoring
In response to the report, NR HS hired a specialist contractor to monitor the air quality with the multi-purpose vehicle (MPV) operating in all three tunnels. Samples were taken in the mobile elevating work platform basket and MPV cab and all levels of dust and gas emission were found to be below the limits in the HSE EH40 Workplace Exposure Limits document. The reports were shared with the operator BBRL.

HS1 rule book revision
A further HAZID discussed a draft revision to ensure the ventilation fans are on for the whole time the plant is in the tunnel. After this had been finalised, it was tabled at the NR HS Rules Working Group a couple of months later. The group agreed that it would take time to revise, authorise and re-issue the HS1 rule book, but that a local procedure could be implemented straight away. NR HS staff are also now instructed to ensure MPV module power units are shut down after work is completed.